In Hortico’s online shop e-HORTICO.pl as well as Company’s garden centers, the retailers can enjoy a wide selection of plants and horticultural products for both amateurs and gardening enthusiasts.
Read more
Poprzedni Następny
HORTICO S.A. » News » Events » HORTICO S.A. honored with the title of Business Gazelle 2018

HORTICO S.A. was awarded the title of Business Gazelle for the fifth time. The ranking, organized since 2000 by Puls Biznesu daily, is the oldest and most recognizable ranking of this type in Poland, gathering the most dynamically developing small and medium-sized enterprises.

This year, the company was placed in the position of 3,259, improving its last year’s result by 777 places.

In each edition of the ranking, the three full past years of the company’s results are examined. In the current edition, the results achieved in 2015, 2016 and 2017 were verified.

Business Gazelle 2018 must meet all of the following criteria: 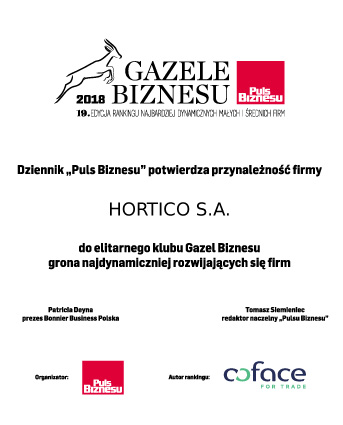